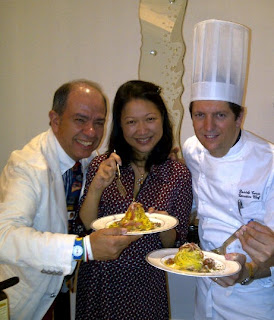 I returned from Kuala Lumpur late last night, raring to get back to work and close up our fantastic next issue. However, one of the first orders of the day was a private cooking lesson and lunch with Vincenzo Spinosi, creator of the Spinosi brand of pasta and famous as Italy’s King of Pasta, and with Daniele Turco, executive chef of the Gritti Palace of Venice, one of the most glamorous hotels in the world.
A PERSONAL TOUCH
The week certainly could have started far worse than with this — a very private lesson and a fun lunch with these two ambassadors of Italian cuisine, with my pasta cooked personally by Vincenzo Spinosi himself, and then the sauce was done by Daniele Turco and also plated by him.
Vincenzo Spinosi was recently awarded one of Italy’s highest cultural awards as Grand Official of Italy — a distinction he shares with opera singer Luciano Pavarotti. Meanwhile, Daniele Turcohas cooked for so many of the world’s celebrities that it’d be too tedious to name everyone. But I can tell you that this roster of names includes Robert de Niro, George Clooney and Angelina Jolie.
And this week, until Saturday, they’re both cooking for diners at Makati Shangri-la’s Red — and at pretty amazingly reasonable prices, considering what a meal at the Gritti Palace would normally set you back.
Everywhere in Venice is pricey, but the Gritti Palace — one of Venice’s, and Italy’s, best hotels — is certainly among its most expensive. So do take advantage of this price differential as you’ll be able to eat very well at Red this week for the cost of coffee and a sandwich at Gritti Palace. 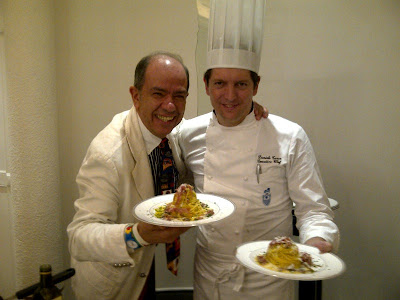 COOKING WITH FUN
What a fun lesson that was today. Daniele Turco is a pretty serious guy with a nice smile and a twinkly sense of humor; but Vincenzo Spinosi is used to bringing the house down with songs, dances and jokes.
When Vincenzo wasn’t concentrating on the pasta pot, he was singing Italian ballads and doing a tango with himself by the corner of the counter. And when he was cooking, it really wasn’t like he was cooking anyway. He was doing all kinds of antics to make me laugh that I was so sure the pasta would be overcooked.
Amazingly, the pasta turned out perfectly al dente. And that was when it was turned over toDaniele Turco for the finishing. And perhaps more amazingly, the first course pasta of prosciutto ham and lemons was done in well under ten minutes, jokes and dancing included. 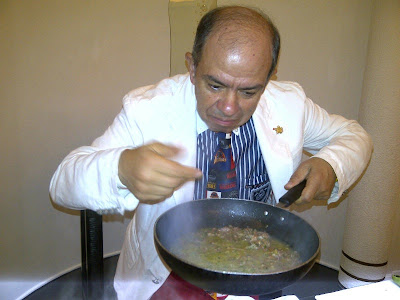 Vincenzo only spoke Italian, and my Italian is outlet shopping Italian at best; but this time I had no trouble understanding his explanation: “I could very well talk about my product and my cooking in a serious way, but that doesn’t inspire people and get the energy across,” he said. 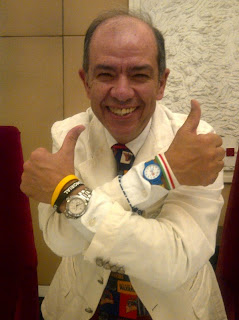 By the way, perhaps to symbolize his serious side (he has singlehandedly taken on the pasta world, after all) and his playful nature, Vincenzo wears two watches. On his right hand he’s got anexpensive Cartier watch, and on his left hand he has a colorful plastic watch. He showed them to me with glee, as if this would explain everything about his philosophy on life. In a way, it did.
SIMPLE AND SIMPLY DELICIOUS
We stopped cooking to eat our first course, and it was absolutely simple and yet truly delicious. Spinosi pasta is meant to accompany simple sauces because they have a way of pulling out the best flavors from the simplest combinations. And so a prosciutto and lemon sauce was perfect to accompany the Spinosini — that’s what Vincenzo calls his pasta — made of very good eggs and full of Vitamin E. The pasta itself is yellow, and it leaks into the sauce so that a creamy yellow liquid enters the picture. 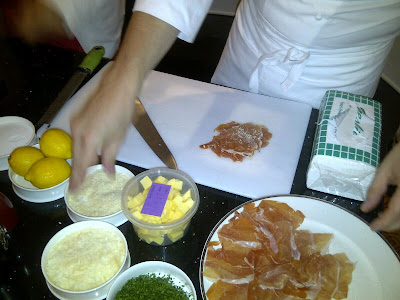 “There’s no excuse now to not have a dinner party,” I said aloud, although I was really talking more to myself. This was Easy Entertaining 101. After all, even the busiest person will be able to whip up a first course in ten minutes, by following the steps of these two Italians. Boil the pasta, chop up the ham, grate the lemon, top up with parsley, and voila — you’re done.
THE SECOND COURSE COMES WITH MUSIC
For the second course, Vincenzo began his dance again to accompany the pasta boiling in the pot. But this time he took his iPad out as well so that music could now actually provide the background for his steps. So it was boil, stir, step, step, stir, step, step. This went on for a while, whileDaniele looked at his partner in crime with resigned amusement and threw slabs of butter into the pan next to him. Then he placed a handful of carefully chopped truffles into it. 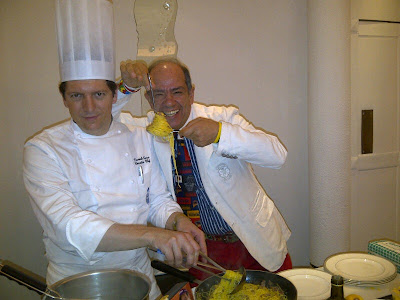 After a minute or two, a little pasta water was added to the sauce, the noodles were done, and everything went nicely onto the plate. For final effect, Daniele grated more of the pretty big chunk of truffles from the Marche region of Italy that a young girl from the famous Angelozzi truffle farm had handcarried all the way with her to Manila.
It was Daniele’s turn to make a joke, although it was more fact than fiction. “To make a tasty truffle dish, all you have to do is put more truffles,” he said with a smile. “There really is no other secret.” 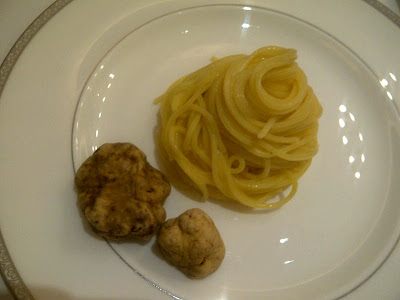 WHIFF OF HEAVEN
Indeed, he put more than a healthy dose of freshly-shaved truffles, and the result — especially with the Spinosi pasta — was a taste and a whiff of heaven. I hunkered down and threw all niceties to the wind, abruptly ending pleasant conversation so I could concentrate on this mound of yellow pasta in front of me, with truffle shavings scattered all over like fallen leaves. 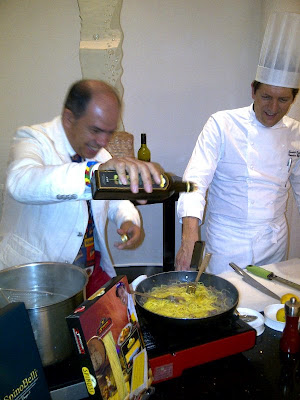 Vincenzo actually doesn’t like me — or anyone else for that matter — to say the word “pasta” in his presence. He feels like Spinosi’s products — all handmade by his very small company in the middle of Italy’s nowhere, with only the finest ingredients — should be able to stand on their own and shouldn’t just be called pasta. He wants them called by the names he’s given them — the Spinobelliis his Omega 3-rich noodles full of the goodness of egg, and the Spinosini is finer and more delicate, perfect for truffles.
DON’T SAY THE P-WORD
So when I first made the mistake of saying the P-word at lunch today, he made a face and corrected me. Apparently he does this with everyone, so even the staff of the Makati Shangri-la now know better than to say the P-word in front of him. I had to be playfully corrected a couple of times today, however.
At the risk of him breaking out into a not very happy song and dance next time I see him, however, I’ve used the P-word in this blog entry just so that readers will know what I’m talking about. I’m not sure just how many out there will understand what I’m talking about if I started writing about Spinobelli with prosciutto and lemons.
But that’s the general idea. Vincenzo wants every pasta dish served at a good restaurant or hotel like the Makati Shangri-la or the Gritti Palace to use his noodles and call them by their names. Not spaghetti with prosciutto and lemons, but Spinobelli with prosciutto and lemons.
FOUR PASTAS FOR LUNCH 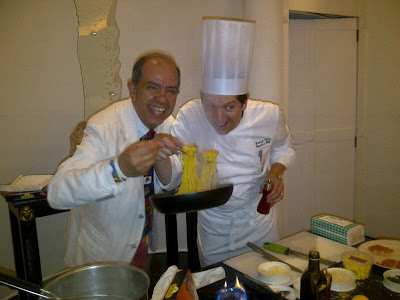 It’s a truly interesting story, and the dishes are all really good. At lunch today, I had the equivalent of four pastas — oops, I mean two Spinobellis and two Spinossinis — including a lemon cream tart in a pastry cup that was topped with Spinossini for dessert. And until this Saturday, you’ll have a chance to actually try this artisan noodles for yourself at Makati Shangri-la’s Red. Don’t miss this great foodie opportunity. I know I’m going to be back as many times as I can.
To reserve:
Call Makati Shangri-la’s Restaurant Reservations
Tel 813-8888 extension 7588/ 7599